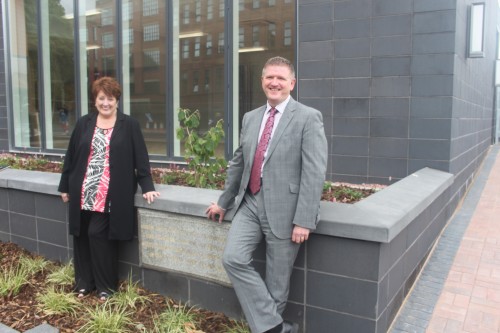 As part of the CHLC development we undertook to restore and improve the Memorial Garden to the front of the building, which local people suggest was a memorial garden to remember the girls & women killed in the 1889 disaster known as the Templeton Fire, the Templeton Disaster, the Greenhead Factory fire

In order to fully commemorate the events and those who died we investigated the disaster further using whatever sources we had at our disposal. We are grateful to the following sources for their assistance:

On 1 November 1889, during construction of a new extension to Templeton & Co’s carpet factory at Greenhead, Glasgow, unusually high winds caused a section of the facade to collapse onto the adjoining weaving shed. Unfortunately, there were workers (mainly women) in the shed at the time of the incident and 29 women tragically lost their lives that day.

We began by trying to determine whether the memorial garden was actually a memorial to those who died in this disaster and why it was around 70 years after the disaster that the open space was turned into the garden and the memorial plaque erected with the following anonymous verse.

We asked Mike Thornley to look into the matter for us (report at Appendix 1) and he discovered that after a bit of toing and froing of ownership, the ground was conveyed to Glasgow Corporation from Templeton & Co on 16 October 1954 on condition ‘that the said plot is gifted by us for public use and enjoyment as an open space or ornamental pleasure ground’.

A plaque was located on a curved wall within the garden which was removed by Thenue for safekeeping. The inscription reads:

‘Green buds for the hopes of tomorrow
Fair flowers, for the joy of today
Sweet memory, the fragrance they leave us
As time gently flows on its way’

The Scottish Poetry Library has not been able to identify a literary source or author for the text.

Mr Thornley was not however able to find any reports on the opening of the Memorial Garden or unveiling of the plaque in any back copies of local papers or in any Corporation minutes or the conveyance document.  Thenue staff also contacted Buckingham Palace to enquire whether or not Her Majesty the Queen during her visit to Templeton’s factory in 1954 visited the memorial garden or unveiled the plaque.

Buckingham Palace have stated that ‘ there is no record of Her Majesty & His Royal Highness visiting the Memorial Garden to which you refer...(on their visit) to the Templeton’s factory in Glasgow on 22nd June 1955.’

Thenue have, in consultation with the Area Association, put in place a proper memorial to the new garden area. This comprises a path with the names of those who died in laid to it and the plaque with the inscription at the end of the path.

We also discovered, within the Stoddard Templeton Collection a verse written about the disaster which will be displayed within the CHLC. (Appendix 2)

The fatalities & the injured

Using the records from Stoddard Templeton and the Scotlandspeople  genealogical website, we traced the 29 women & girls who died and have in our possession copies of all their death certificates.

There were also a large number of people injured, listed in the Stoddard Templeton archive.

On visiting the Stoddard Templeton collection, we also saw a Bible which was issued to relatives of those who died. The Scottish Bible Society gave us access to the Minutes of their AGM for 1889 which state that ‘twice this year were the Directors called upon, in the providence of God, to express, by the presentation of the Book of Consolation, their sympathy with those overtaken by sudden calamity...(and) deprived of at least one member ...by the disaster at Greenhead Glasgow, as also to ...the surviving workers, a memorial Bible with suitable inscription.’ The Scottish Bible Society intend to run a story on this  in the next edition of their newsletter ‘Alive & Active’.

These Bibles were paid for by the then National Bible Society. Interestingly in this year they received income of £36,487.11 – the equivalent of £2.7m in today’s money!

Even though industrial accidents were common place in Victorian Britain, this disaster was of a magnitude that it received attention from UK wide press particularly in the immediate days following the wall collapse. The Herald archives allow us to see what was printed regarding the actual disaster, the rescue, messages of support from the Queen as well as reports on the fatal accident inquiry and compensation payments which were made to the victims’ families. These pages are historically valuable and help to set the disaster in the context of the era. These pages can be purchased from the British Newspaper archives.